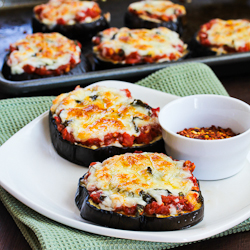 Cut off both ends of the eggplant; then cut it into 3/4 inch thick slices (trying to make them the same thickness!)  Put the eggplant pieces on a double layer of paper towels and sprinkle both sides generously with salt.  Let the eggplant sit with the salt on it for about 30 minutes to draw out the liquid.  (After the eggplant sits for 15 minutes, turn on the oven to 375F/190C.)

While the eggplant sits, make the sauce.  Heat 2 tsp. olive oil (depending on your pan) and saute the finely chopped garlic just until it becomes fragrant.  (Don’t let it brown.)  Add the petite diced tomatoes, dried Italian seasoning, and dried oregano and let the sauce cook at a low simmer until it’s thickened, breaking up the tomatoes with a fork as it cooks.  (Add water as needed, a few tablespoons at a time as the sauce cooks, keeping it hot by simmering at very low heat until it’s needed for the eggplant slices.)

After 30 minutes, wipe the eggplant dry with paper towels (this also removes most of the salt.)  Spray a roasting sheet with olive oil or non-stick spray, lay eggplant slices on, brush the tops of the eggplant with olive oil, and sprinkle with dried Italian seasoning.  Roast the eggplant about 25 minutes (but “not so long that the slices become mushy and lose their shape” as Julia says.)

While the eggplant roasts, thinly slice the fresh basil leaves (if using) and combined freshly grated Parmesan and low-fat mozzarella blend.  After 25 minutes or when eggplant pieces are done, remove eggplant from the oven and turn oven setting to broil.  Spread a few tablespoons of sauce on the top of each eggplant slice, sprinkle with thin basil slices (if using) and top with a generous amount of cheese.  Put pizzas under the broiler until the cheese is melted and slightly browned.  (This took 6-7 minutes for me, but I was using a toaster oven and in a more powerful broiler it would probably only take a few minutes.)  Serve hot, with red pepper flakes to sprinkle on pizza if desired.